Traumatic Brain Injury Lawyer Near Me

Let the Turnbull, Holcomb & LeMoine Get You the Compensation You Need for Your Traumatic Brain Injury Claim

In many accidents people file personal injury lawsuits over, there is damage suffered by the brain due to a blow to the head. As one would expect, the ramifications of damage to the brain are extremely grave and the consequences of a brain injury can be felt far into the future.

Traumatic brain injuries (TBI) are some of the worst cases that Turnbull, Holcomb & LeMoine comes across. We understand that they require a significant amount of attention, compensation, and experience to handle correctly. The severity of these injuries leaves those injured with little option but to take legal action to try and recover some degree of compensation that can cover the many damages they have suffered as a result.

Our firm is experienced in providing specialized legal representation to those that have been harmed in accidents and have suffered traumatic brain injuries. Turnbull, Holcomb & LeMoine is passionate about getting those harmed this way the compensation they need in order to get their life back on track.

If you or a loved one were involved in an accident and suffered a traumatic brain injury due to another’s negligence, contact Turnbull, Holcomb & LeMoine today at (205) 831-5040 or online for a free case evaluation, or to discuss your rights and options further

View All Our Practice Areas

What is a Traumatic Brain Injury (TBI)?

When someone suffers damage to their brain because of a physical blow to the head that either directly impacts their skull or causes a severe jerking movement then it is considered a traumatic brain injury. This term actually encompasses a number of different types of injuries that cause damage to the brain via trauma suffered by the head. These injuries can range in severity yet all have the potential to inflict terrible damage to the brain that leads to debilitating symptoms.

According to the American Association of Neurological Surgeons, there are approximately 1.7 million new traumatic brain injuries cases every year. They also estimate that as many as 5.3 million Americans are living with a disability caused by a TBI.

Some examples of traumatic brain injuries, include:

Concussions are the most common of traumatic brain injuries. They consist of damage done to the brain that temporarily interferes with a person’s cognitive abilities. While concussions are serious injuries not to be taken lightly, they are on the milder side of the traumatic brain injury spectrum. This is mostly due to the fact that they can heal on their own with rest and prevention of any further trauma but they can develop serious complications if not monitored.

Injuries like brain contusions can be summed up as bruising of the brain. The trauma suffered in an accident can lead to blood vessels in the brain being damaged leading to the development of a contusion as the blood leaks.

The brain actually moves slightly inside of the skull and can dangerously slam into the walls of the skull when someone violently jerks their head in one direction or another. The brain can suffer severe damage when this occurs despite the skull not being directly struck by an outside object. If the brain collides with the side of the skull that is the site of the impact then it is a coup injury and if it hits the opposite side then it is considered contrecoup.

When someone experiences very sudden and powerful forces that act on their head causing violent twisting and rotating then they are at risk of suffering a diffuse axonal injury. This type of injury consists of the brain suffering damage due to shearing and twisting of the tissue as it scrapes across the surface of the inside of the skull. Diffuse axonal injuries are extremely severe and have a penchant for causing comas.

When it comes to penetrating brain injuries, many accidents can cause trauma to the head that leads to a physical penetration of the skull which does direct physical damage to the brain. This often exposes the vulnerable brain to outside vectors of further harm in addition to the catastrophic damage inflicted by such physical trauma.

HOW MUCH IS MY TRAUMATIC BRAIN INJURY CASE WORTH? FREE A CASE

Traumatic brain injuries are different from many other injuries in that there is a heavy limit on what can be done to repair the damage done to the tissue of the brain. Unlike something like a broken bone, there is not much that can be done to fix brain damage since the brain is such a complicated and delicate organ we still do not fully understand. This means that many traumatic brain injuries cause permanent damage that leads to incurable issues.

This is because the brain is not just a part of our body but rather the physical source of our cognitive functions and essentially the self. Damaging the brain does not just hinder a body’s function but instead causes immense cognitive disruption that can shake people to their existential core.

It is not unusual for those that have suffered severe traumatic brain injuries to deal with issues stemming from their symptoms such as:

There’s no doubt that an accident that is severe enough to inflict a traumatic brain injury can put someone in difficult financial circumstances. Those that suffer traumatic brain injuries because of the negligence of a liable party likely will want to seek compensation for the damages they suffered. A personal injury claim gives the opportunity to hold these liable parties accountable for their negligence but the process can be complicated and one easy mistake can significantly reduce the amount of compensation you could recover with a settlement.

This is why you should consider speaking to Turnbull, Holcomb & LeMoine about your case. Dealing with a traumatic brain injury is difficult enough but trying to do so while trying to seek compensation via a personal injury claim or lawsuit is something no one should have to do. Turnbull, Holcomb & LeMoine specializes in assisting those that have suffered these kinds of injuries in accidents ranging from car collisions to sports accidents. Our lawyers are familiar with how these injuries can cause lifelong problems and know what to look for in these cases to maximize the amount of compensation our clients receive.

Cases involving traumatic brain injuries also tend to be some of the highest value cases our firm sees due to the intensity of the damages suffered by those injured this way. As a result, the stakes are raised and insurance companies are more likely to try and fight a case in court rather than reach a settlement.

Turnbull, Holcomb & LeMoine has the experience and resources needed to take cases like this to trial and effectively fight for your right to compensation. Other firms may be happy to take the easy route and accept a settlement much less than what you deserve. Our firm instead takes an aggressive stance where we make it clear to insurance companies we are willing and able to file a lawsuit and succeed in a trial.

What Our Traumatic Brain Injury Lawyers Can Do for Your Case 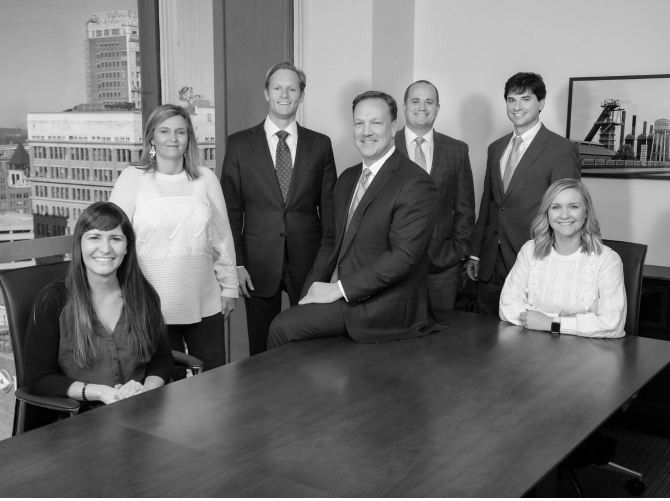 If you have suffered a traumatic brain injury in an accident caused by another party’s negligence the best way to fight for your rights and to get the most compensation possible is to hire an experienced and aggressive personal injury attorney.

At Turnbull, Holcomb & LeMoine, we have the experience, knowledge, and resources to handle the complexities of personal injury lawsuits involving traumatic brain injuries, including those involving liability disputes, multiple at-fault parties, and other complications. Let us handle your claim so you can focus on what is really important: your health and your family.

Contact us online or call (205) 831-5040 to schedule your free consultation. There is no obligation and no risk. We look forward to hearing from you.

Tell Us About Your Case